It seems like I was just writing to you, but it has been more than a month! So much has happened. All the guest cats have been adopted and we have 11 new kittens. With 16 cats in the café, most of them kittens, I find myself feeling old and overwhelmed. But that has given me time to reflect and decide what to say to you. 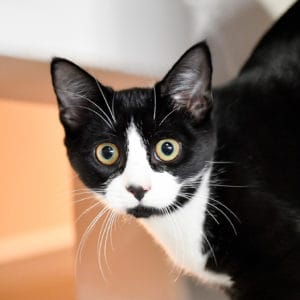 Many people comment that I spend a lot of time hiding out in the back. I am not too sure why I do this. I just got my vaccinations and the vet said my health is good. I still like to get cuddles from Ken and Richelle and others I trust, but new people scare me. I suppose I got spooked by a few too many unexpected, grabby touches. People probably mean well but it’s my body and I do not like to be touched without my permission. I am not a dog after all! 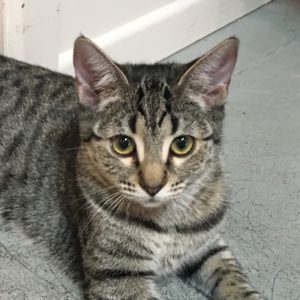 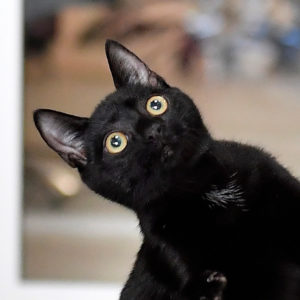 I have also found I do not like new cats very much. Remember I mentioned Beth the last time? She really scared me. We really did not get along and from what I could see, she was terrorizing most of the other cats as well. Tiger Lily told me to just stand up to her. I did, but it did not seem to work. She was just that fierce. She even had a go at Conner a few times. I hoped he would take her down, but it was against his pacifist principles to really do much against her. I hate to say it, but it made me feel like the tabbies were in league against the rest of us. I confess I lashed out at Tiger Lily a few times. Even though Beth has gone to be queen in her own home, I still feel like the peace amongst us worker cats is slow to return. 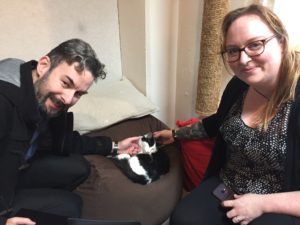 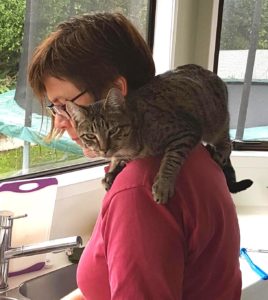 Yet, now we have to work together to train the 11 new cats who more than replaced the previous guests.  Othias found his new home on April 6 and is greatly loved by his new people as he tries to make friends with his new brother cat, Ludo. Ruby’s adoption was confirmed on April 11. She has two little girls to love her and a human mom to cuddle. Rachel has her own boy to ride on his shoulders now. She also supervises the mom’s washing up. Her adoption was official on April 30.  As I mentioned above, Beth found her home. Amazingly to me, she had two applications from people who wanted to let her be their only cat. Some people are just so nice. Hermes and Athena were brother and sister from KittyCat Rehoming Wairarapa. They were so popular with customers due to their silky hair and cuddly ways that they have already gone on trials with their new families after hardly a month in the café. Hermes had a few applications from very nice people and Richelle told me it was hard to decide. Athena didn’t get any applications for almost the whole month even though she had many people interested and in love with her. She was almost considered for worker cat. But her first fosters came in and told us they had never wanted to let her go. It seemed meant to be even if it was all in a rush there at the end.  Even grouchy Oscar found a family to give him a second chance. The same ones who love Rachel are trying to get him to trust them and he has started to play and come out of hiding a bit. He will be fine, I’m sure. He will soon be cuddling with Rachel and stealing her food instead of letting her steal his. 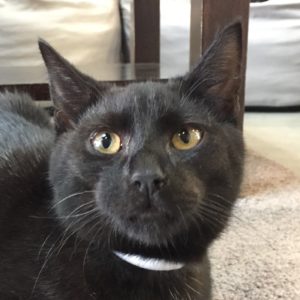 The new cats are almost all black, so we are now the majority in the café. I wonder if it is time for my take over? Nah, I will let Conner continue for a while. I do not feel like being everybody’s groomer. The first group in were the DumpCats five: Sabbath, Saxon, Shylo, (all black) Smooches (tuxedo), and Sage (tabby). Already, Sage and Sabbath have an application in for them to go together. Those two were the first out to play and cuddle. Smooches was next and Saxon started to play in late April and Shylo just came out of hiding around the first of May. Domino and Daisy from Feral Nation came next. We had been expecting them for a long time, but they had tummy troubles so had to stay longer at the Okada’s. I feel a bit jealous that they got extra training from Cait Sith. It seems that their main area of study was singing—they can be loud. Domino (a boy) has one white spot, but Daisy looks like a female mini Chenzo. They both love to play and cuddle. Last, were four more blacks from FeralNation who are now recovered from dermatophytosis. There are two brother sister pairs: Pango and Po plus Kuro and Yoru. You can check my last letter to remind you of the meanings of their names. Yoru already has an application for her. She could become a sister to Jet who is doing really well in his new home and scarcely hides at all. Kuro has a few people interested and one application in already too. Po is always the first to play and Pango has gravitas. 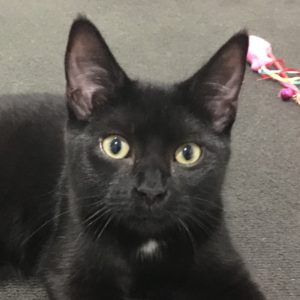 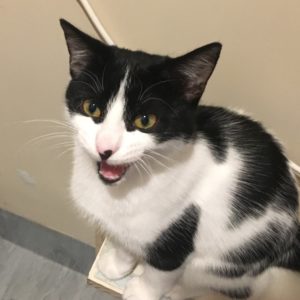 I know we worker cats are supposed to act like older family members for the new cats. I am doing my best. I hardly yell at them at all even when they take my favourite hiding places. And I pretend I am not bothered when they hog all the toys. Just please remember, if you see me out in the café, ask for my permission before you touch me. I may decide to stay out more often if you do.