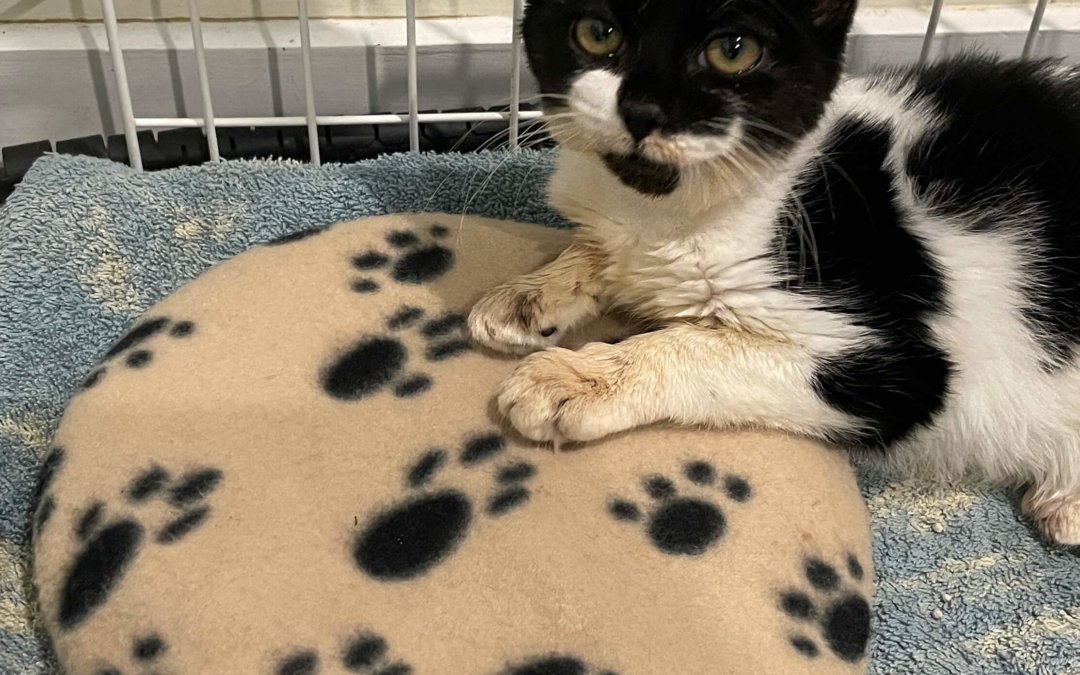 Hello everyone, I’m Pippin. Sorry it took us a while to write to you. My jaw is shaped differently so Richelle didn’t understand me at first. She wrote updates about me on social media and even had a Givealittle page to raise money for my special vet visits and tests, but she couldn’t tell you how I feel until now.

It looks like I am going to grow out of some of my physical difficulties. I am so glad that I get to be with the other cats, and I really hope that someday they will play with me. I am trying to get stronger every day so that I will be ready for that.

I was always small. My brothers and sister could get the food better than me, but I could run and play with them just fine. It wasn’t until I was a few months old that I started to have my problem. I would get tired so easily and then I couldn’t really walk. It was hard to focus on anything. I just wanted to sleep all the time.

Ken and Richelle took me with my brother and sister to get vaccinated, but I didn’t get any. The vet thought I was so sick I would die soon from something called FIP. I heard them say that they would give me a chance as long as I kept eating. I could tell they really wanted me to live since they kept trying to feed me all day, so I tried too.

I felt sad when my brother and sister left but I understand that Richelle and Ken were afraid that they were too rough with me and that they would take all the food as usual. I didn’t mind that. In fact, I was so tired that I didn’t much care about anything.

They took me to see other vets who had other ideas about what might be wrong with me. I had to take antibiotics for pneumonia and another medicine for toxoplasmosis. I had to give blood a few times too.  I had two long visits with a vet who shined a light in my eyes and had me do many other things that were kind of hard. It was frustrating that I couldn’t kick when the little hammer hit my knee, but I just couldn’t feel it. They were all gentle with me and made remarks about how calm and peaceful I was. Really, I was just too weak to resist. The tests didn’t give any clues and the medicines didn’t help as much as everyone was hoping they would. There were other tests they could do, but that involved surgery and I was still too small and weak. And even if they did find out I had something called congenital Myasthenia-gravis, there’s no cure. It seemed; however, the best case was that I had that because maybe there was a chance I could grow out of it.

So, we waited. My life settled into a daily routine of trying to eat about four or five times usually from off Ken or Richelle’s finger so I could reach the food, short bursts of play and physiotherapy, being carried to my litterbox, and sleeping a lot. Sometimes the only way I could assert myself was to refuse food. I had no other control in my life. About once a week I had to endure the indignity of a bath. I tried to wash myself, but I only succeeded in staining my fur brown. That happened because my jaw is a funny shape, I can’t really swallow properly, and I drool a lot. Richelle says I smell like wet cat and regurgitated baby cat mousse. But I kind of like it that I am a self-made calico boy–Totally unique!

Finally, when I was six months old, a few things started to change. My baby teeth started falling out and I got a bit stronger. I started to walk, climb and even jump! After I had my vaccinations, I was introduced to the other cats in the house. At last, I would have some friends to play with!

Maybe I come on too strong. I want to play so much but I can’t keep up. Maybe they just don’t know how to treat someone who is different, so their uncertainty made them seem cold. Anyway, it’s taking a while, but they are gradually warming up to me. And I have even more reason to exercise more and get stronger. I am still a little picky about eating. And I still hate baths!

If you want to see my life in pictures, Ken made a video of my progress. You can see it here  (or use this url https://www.youtube.com/watch?v=RlOh6YZaHuc)