Should Cats Roam or Stay at Home? 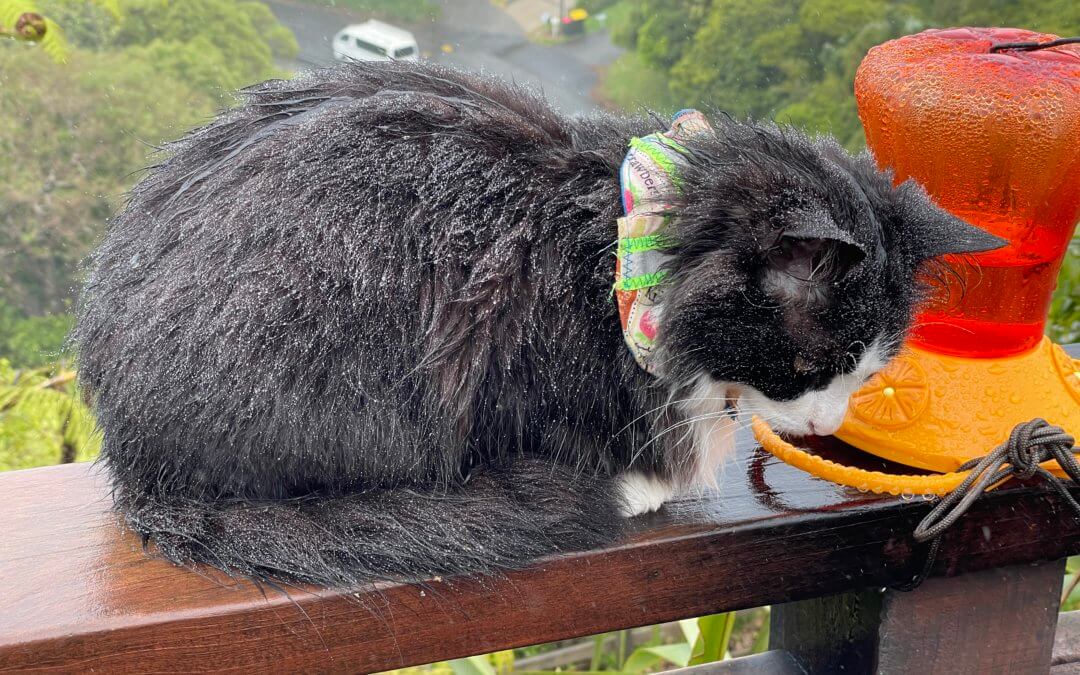 Depending on whom you talk to, the answer could be yes or no to either letting your cat roam or keeping him or her permanently indoors. Pet parents that keep their kitties inside will offer numerous reasons for preventing cats from venturing outdoors such as “I don’t want my cat hit by a car”, or “he’ll catch a disease”, or maybe even “what if they don’t come home?”

On the other end of the cat parent spectrum, you’ll find owners that insist the cat is bored when kept inside, or the cat is destructive when secluded in the house. Some even maintain that the cat is overweight because he doesn’t go outside, and not because he eats too much. Then some cat parents suggest their cat will only stay in the immediate area surrounding their home. Wishful thinking, folks!

Let’s consider some of the arguments both for and against allowing domesticated cats to roam outdoors or retire to permanent indoor status.

Outdoors: Do Cats Have Natural Predators?

Cat predators will hunt and eat cats for sustenance. In New Zealand, cats really have no natural predators. Typical cat predators in the US include:

But even if these large predators do not exist in New Zealand, some smaller animals can harm outside cats. Among these we find:

Many of these are not in New Zealand as well but there are still dangers. You know who are the real local cat predators? Malicious human beings, who find pleasure in harming these companion animals.

Cats that roam freely are at risk for animal cruelty. Unfortunately, angry neighbors will poison cats they don’t want on their property for digging in flower beds or hunting birds, They shoot them with BB guns or worse, and if this isn’t sufficient, roaming cats are also often hunted, trapped, and then abused for fun or sport. More often than not, they are killed.  While cats are renowned hunters, they are potential prey and will be hunted not only by humans but by dogs off a leash or by strays. Injuries from dogs are often lethal.

Cats do not have an automatic instinct to navigate traffic or specifically avoid certain streets or roads. One of the most common dangers they face is a car or moving vehicle. Free-roaming cats often dart out from in between parked cars into moving traffic and become a target for moving vehicles such as trucks, cars, motorcycles, and even bikes. Often they freeze in headlights and cannot be avoided by oncoming traffic. Felines hit by cars usually do not survive their injuries.

Don’t forget illness. Cats that come into contact with wild animals or other free roaming cats are at risk for illness. Diseases such as feline immunodeficiency virus, rabies, or feline leukemia are present in wild populations and they are often terminal. Vaccines should be kept up to date if your cat is wandering outside. Plus, don’t be surprised if kitty comes home with a tick, fleas, worms, or worse.

Your cat may happen upon poisons such as rat poison, slug bait, pesticides and herbicides or even poisonous plants depending on where you live. Even poisoned rodents eaten by cats present a risk. [Editor’s note; possum and stoat traps can be a danger to pet cats ] 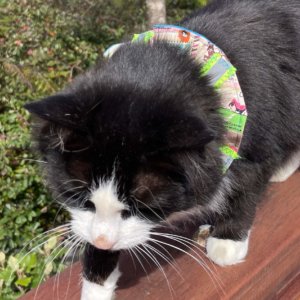 Cait Sith models one of her many Bird Alert Collars. They have a break away clasp so she doesn’t get stuck anywhere

Your cat’s radar probably won’t be the problem here, but getting trapped in a drain pipe, well or building is a distinct possibility. Use a collar with owner information or provide your cat with a microchip and make sure to register it, so it will find its way home with a bit of help.

Bird lovers often despise the thought of free-roaming stray cats or pet cats allowed to roam about because they hunt and inevitably kill some birds. Bells on cat collars are not recommended because, more often than not, they annoy the cats more than the birds, and can often catch on bushes or fences placing the cat at risk..

When cats slink, they purposely avoid making noise, so a small bell to appease bird lovers should be avoided because it won’t achieve the objective of safeguarding birds. On the other hand, brightly colored collars will help birds due to their having exceptional eyesight. They will be able to pick that color out of the shrubbery. So, a “bird alert collar” is a credible option.

My Cat Only Roams Near My House

Do you really believe this? Research has shown that house cats can cover 20 acres when out and about. Screened-in cat-safe enclosures are a viable and safer alternative. Another option is harness training your kitty for outdoor time. 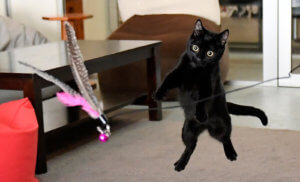 Do Cats Get Bored Indoors?

Cats can get bored anywhere (and they will) but sending them outdoors isn’t the answer. Boredom will be less problematic if the cat finds your home interesting.  Cat perches near windows will allow your cat to birdwatch. Playhouses, scratching posts, and indoor cat trees can all contribute to stimulating cat play. Owning more than one kitty will keep them all occupied.

My Cat Will Become Overweight Sitting Inside

Many cats, even with a bowl of kibble out 24/7, will not gorge themselves. Felines tend to eat several smaller meals throughout the day. You can also get an automatic cat feeder with a timer. If your cat is lazy, feeding toys will make your cat work for his kibble. Multiple cats will increase play activity, and your vet can recommend appetizing dietary food. [Editor’s note: we recommend and sell Light Weight Care by Royal Canin.] 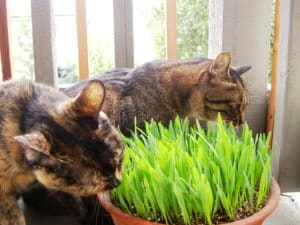 Providing indoor cats with cat grass can soothe their stomachs

If by destructive, you mean that your cat scratches the furniture, know that all cats need to groom their claws. Providing sisal posts in different points of the house can direct your cat away from your furniture and onto the posts. 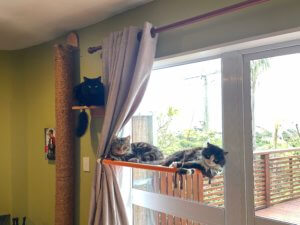 Inky, Ton and Cait Sith all use the rope scratcher/climbing pole to get up the the high window bed

My Cat Has Always Lived Outdoors, He Won’t Be Able to Manage Indoors

Wrong! Cats are adaptable if they want to be. It’s merely a question of how interesting the indoors are and if they have company. Initially, you may have to thwart some escape attempts. [Editor’s note: our cats went from being outdoor cats in Japan to being 100% indoor cats in Kuwait, Mexico and Shanghai. We just had to play with them more often than we did when they went outside.] 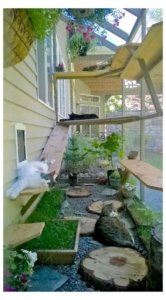 Another option is providing the cat with a cage or wire closed-in balcony, extended windowsill, or backyard, so the cat can have the best of both worlds while staying safe. [Editor’s note: this is our plan for when we move to the caretaker’s apartment in the cafe. Our cats have enjoyed access to outdoors in the daytime in Korokoro, but they will get a cool catio on the balcony of their city apartment.] 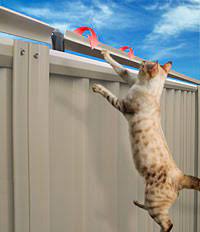 If you like the idea of your cat having the backyard for outdoor escapades, an Auckland company, Cat Containment Systems, makes a rolling mechanism that can be attached to the top of the fencing. Because it rotates, climbing cats are unable to grip it and fall back into the yard. If no trees are available to provide alternative escape routes and the entire yard is fenced in, it’s an effective option. Your cat will be challenged and physically active until he decides the effort isn’t worth the trouble.

If you are convinced that your cat needs to have some time outdoors and you don’t have the possibility to provide an enclosed area, a good cat collar with your information will be of great assistance in the event of an emergency. Place a bell on the collar to alert birds and other small mammals that the kitty is out and about and make sure the collar is made of reflective material in case your cat is a night prowler.

With a bit of organization for the outdoors or indoors, your cat will enjoy a long, stimulating, and healthy one of its nine lives.