Since I have been occupied with kitten training, I usually let young Inky give you the news of the café. But this concerns me personally so I felt I must tell you myself. Recently, I broke my tail. I won’t tell you how it happened except to say that it was a great adventure and only through great skill and bravery did I escape with my life. I tried to hide the pain but Ken and Richelle noticed the blood where the bone had pierced my skin, so they took me to the vet. I hate going there. The doctors and nurses are probably doing their best to be nice, but I have to suffer such indignities! This time the tip of my glorious fluffy tail was shaved revealing the crumpled bit at the end. It looked like a rat’s tail and I must admit that for hours afterwards I was confused and tried to hunt and kill it. I got special, wet food so that made up for things a bit. The next morning, though, I got nothing! Then I had to go into the carrier—without any treats! I couldn’t understand why they were so cruel, and it was just the beginning. I was abandoned at the vet’s, shaved even more and had sharp needles put into my skin! I don’t know what happened next. I guess I passed out. My tail when I awoke was even weirder, so I bit at it. A horrible collar was put around my neck. It is so awkward! I still can’t avoid bumping it into doors and spilling food and water with it. I also cannot groom myself. But, because I maintain my flexible figure, I was able to bite at the horrible snake—ouch! No, that was my tail all along! Suddenly, I was back at the vets. I fought and scratched, but they still managed to put some syringe covers and tape on my tail. It was horribly clunky and looks ridiculous. I had no dignity left! But that was only for a week. They took it off to reveal that more of my tail was shaved! It really looks obscene! Even worse, I have to have an even bigger collar just as I was figuring out how to bite the snake, no, sorry, tail with the smaller one.   Through all my misery, the kittens, Tigger and Kaha are helping to distract me. Even though I don’t understand why Ken and Richelle are letting this happen to me, I still love and trust them. They have always taken care of me and I know they always will. So, I will try to patiently endure this misery.

By the way, the café will be closed both Mondays and Tuesdays until the school holidays so that Ken and Richelle can spend more time with me and recover from their colds.

I have heard that many of the cats got adopted 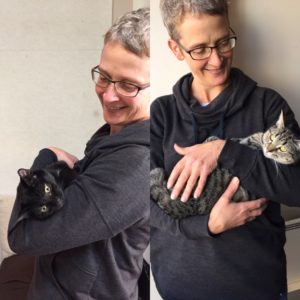 Sage and Sabbath (now Basil) on their adoption day

. Smooches (now Billy), Sage and Sabbath (now Basil), Kuro (now Astro) and Yoru and Pango all found their people. Don’t worry, there are still six lovely adoptable cats in the café: Oscar, Po, Daisy, Domino, Shylo and Saxon. So, come and meet them if you are keen. Tiny of Naenae will come to the café around June 11. But her kittens: Sparrow, Cosmo, Tigger and Kaha have a month more growing to do. Graduates Jake and Pixie will also be there to enjoy café life again while their people holiday. It will be nice to see how they have grown.

Don’t let the weather stop you. Come to the café to play and cuddle with the warm kitties. They look forward to seeing you.