Inky here again. It has been far too long since the last letter to you, so I am taking over from Cait Sith. In case you were wondering, she is okay. Just busy with new kittens to train. Or, at least, that is her excuse. How hard can kittens be, really? Rachel and Ruby are three-month-old tabby twin girls from Dump Cats. They are playful and fearless I hear.  I think we have been busy at the café too. (At least better than the winter–it makes me wonder: are you humans afraid of getting wet? Personally, I am fascinated by the sink taps and love to stick my face in glasses of water.) Regardless, I still have time to write to you.

Last time I wrote, Oscar and Olive were the kittens in training at the Okada house. They both came to the café in November and found homes almost right away. Oscar left to his new home at the beginning of December and Olive will go with her nice people in early January. Othias (the frozen kitten brother) relaxed in good foster care and came to the café where he is now settled in to our group. We call him Oty. He and Olive run around like crazy and even I don’t mind playing with them every once in a while. 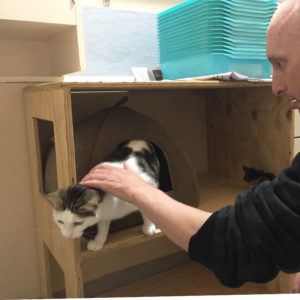 Cleo found a home with a great group of adults and is settled and happy. Hazel and Ophelia went to their new home together, so they can go on tormenting each other comfortably.

There was a change in life goals for Conner and Spot. Their people couldn’t take them any more for reasons that were nobody’s fault. Spot found new people quite soon. A family that had loved him when he was promised to others called the café as soon as they found out he was available again. He will go and live with them along with Monkey (more about her later) in January. Ken and Richelle decided that Connor would be a great permanent resident. They like his laid-back leadership style which consists of grooming. He even manages to pin me down every once in a while. I don’t mind too much (although I protest). He helps to get those hard to reach spots. 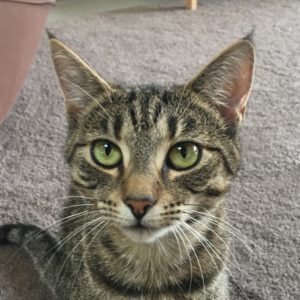 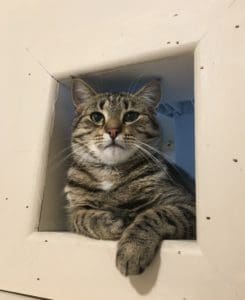 Wondering about Monkey? Well, she came with two of her relatives, Tamarin and Capuchin,  from a colony located behind a piggery outside Greytown. These are some tough tabby girls.

They are gradually warming up to the rest of us cats and maybe will stop hissing at us eventually. Monkey is a people expert. She especially likes to get attention when they are eating. I know Ken and Richelle don’t like that kind of forward behaviour, so I don’t usually try it. However, she and Tamarin also really like laps and all kinds of cuddling. Tamarin loves to perch on Ken and Richelle’s shoulders, which makes me jealous since that is my place.

Capuchin is more reserved but is up for a cuddle or some play nearly any time a human approaches her. People have a lot of trouble telling these girls apart but with time will see they are each unique. 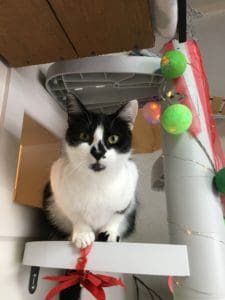 Crystal is another new tuxedo cat who is blossoming well in the café. She used to hide all the time but is now out and loving the petting she can get in the cafe. Only thing is she nips when over-excited so it is best to pet her softly.

Remember Ms Max? She became a permanent resident and got a new name: Tiger Lily. I think it suits her well since she is so pretty and fierce. She and Connor have a thing going but I am doing my best to get her to try a black. Right now we are just at the wrestling stage, but I hope to soon report that we are sharing a beanbag.