A lot has been happening here at Neko Ngeru so I thought I would take a moment to tell you all about it.

First, I will tell you about the recent adoptions! 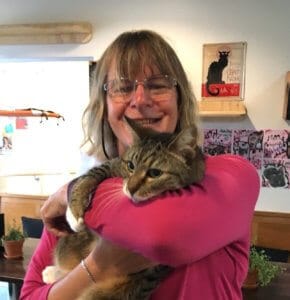 Sharon is now a boat cat. She is so happy as the queen of her own small kingdom that no other cat can reach and she loves the attentions of her human. Mia found a good family at last and will go to live with them later in the month. Snow moved to his new territory and is settling in so well. Some of the adoptions have happened for cats I did not even know when I wrote the last letter. Fred and George were ginger twins from KittyCat Rehoming Wairarapa (KRW) who never met humans until they were nine weeks old, but they did not act like ferals in the cat play room. They went to their new home together last week. Teddy Bear is a soft, fluffy, ginger giant with a sweet temperament. He will go to live with his family this weekend. Many people will miss him at the café since he is so popular.

There are still cats available for adoption. You know about Sparrow, Lola, and Finn. They are welcoming people every day for cuddles and play. 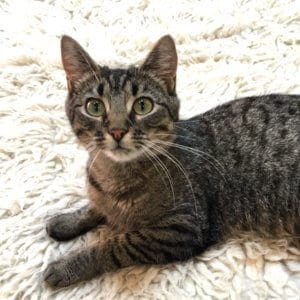 Katie is still in the café even though she has had two families interested. She will find the perfect home soon, I am sure.

Toby came with Teddy. He is a silver tabby who seems to be solid muscle but is actually clever. He loves people and will come right up and head-butt them to get attention.

Ginge-Klaus, a dark ginger with white, is another who loves peoples’ attention and is not afraid to ask for it. He is also playful with the other cats especially Chenzo. 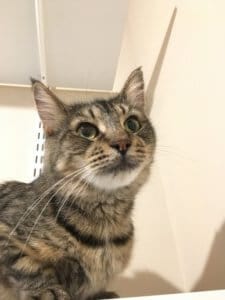 Moko, a tabby who used to be called Smoochie, will also call for attention and even likes belly rubs.

Harliquin Rose, a black tortie, came with Po and Dipsy, three-month old caesarian-born brother and sister tabbies. She is getting more kittenish too as she gains weight and has her soft coat grow out. Yet, she will always be small since she had her own kittens while still a kitten herself. 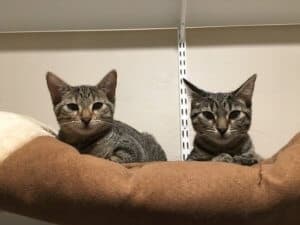 All the above came from Outpawed, but we have had some come from other groups as well such as Jake and Pixie, six-month old brother and sister who are black as shadows except Jake has a few white hairs on his neck. They are from Wairarapa Community Kitties and should be adopted as a pair. 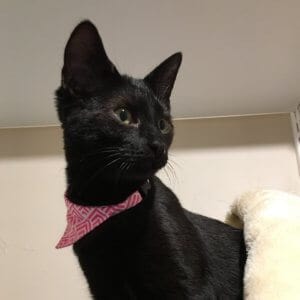 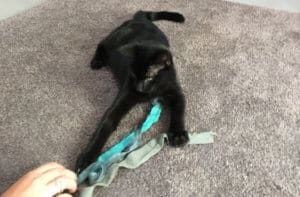 From Feral Nation, we have Eva who is a mostly white calico with soulful eyes. Missy and Nimbus will come soon. There is such rapid change, it seems humans can always come and meet a new cat. 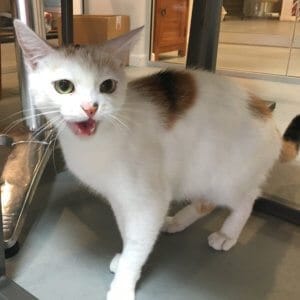 We, cats are all very excited about the new climbing furniture going up on the walls of the cat play room. Now we can walk through the bookshelf and over the street window. I heard the plans are for us to be able to walk all the way around the room without touching the ground. That will be great for cats like me who love high places.

Other news: last Wednesday, we got to help the humans play cat bingo and we learned a lot about all the different breeds of cats. We are all mixed, so tend to look down on those over-bred pampered pusses. It was fun though, so we’ll do it again next month. There will be another Cat Toy Making Meetup March 29. Also, we plan to pose for a life drawing sessions with artists and to help the humans get into yoga poses by doing what we do best—distracting!  We are selling the new Entertainment Memberships with special early bird offers. The proceeds all go directly to the four cat rescue groups we work with. There are many reasons to come visit us at Neko Ngeru.