It was another tough month at Neko Ngeru. We did not have as many customers as we’d hoped in the school holidays and we only had six cats in the café until the end of July. Ken and Richelle really did appreciate the customers who came in to support us and the cats worked hard but loved playing as usual. 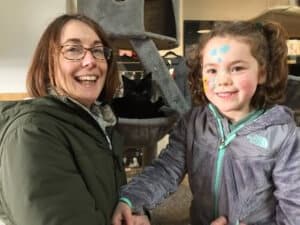 Nox stayed at the Okada home about a week after he finished his anti-biotics. I never saw him since he was isolated, but Richelle and Ken would spend hours with him. I tried not to be jealous. He got to play in the café for one day before his people came to take him to his forever home. He adjusted quickly and is now giving his cuddles to his new family.

Once the cats started coming, they came in a rush. 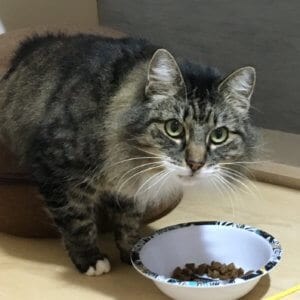 First, SweetyPie came from Kitty Cat Rehoming Wairarapa, finished her quarantine at the fosterers’ and began to adjust to the café. At first, she hid in the privacy room in the day and spent the early mornings up in the security shutters. No one enjoyed getting her down.  After two weeks, she began to come out to the cat play room in the day to be petted and stayed in her favourite bed-box all night. Although she still wants to eat in her bed, Neko Ngeru staff do not mind. They say she is a beautiful cat worth waiting for. 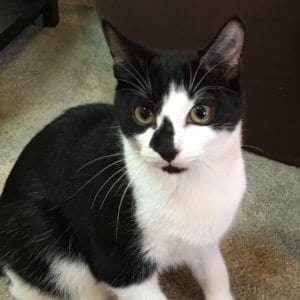 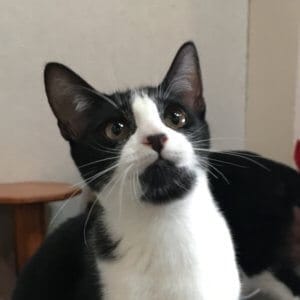 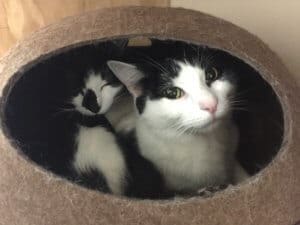 Four cats have come from Feral Nation: Spot, Harry, Sydney and Chiu. Spot and Harry actually came twice! The first time, Spot was sneezing so we sent him back along with Harry for more quarantine. They joined Sydney who was in line for us. It turns out Spot is just a sneezy guy with no other flu symptoms, so they are now in the café. Every time Ken and Richelle hear a sneeze they jump, though. They look like brothers even though they come from different litters. We tuxedo cats are all quite handsome if I must say so myself. Chui is a big, shy guy who stays inside a cocoon bed in the privacy room all the time like a snail in its shell. Hope he just needs time since he does love to be petted.

Two cats were in quarantine at the Okada house from UHARS. I snuck into their room once, but only once. Those ladies are big! They are easily triple my size. I will not try to mess with them. I heard they are called Trixie (tabby) and Beyonce (black), but Richelle and Ken have shortened that to Biyon. They are now in the cafe, adjusting well. 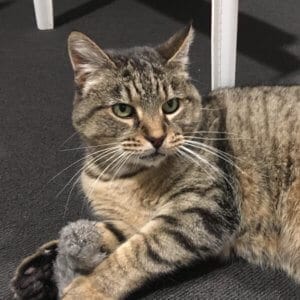 Another cat from Kitty Cat Rehoming Wairarapa is in quarantine at the fosterers: Connor. He is an active tabby guy who is hard to photograph according to the fosterer since he keeps moving. He has a good health report so far, so, with luck, will be in the café tomorrow.

I heard that I will be training a new group of kittens soon. Dump Cats have some that will need me to get them into shape for the café. I am quite proud of young Inky. Last I heard he was growling at the new cats and being strong and magnificent.

All these new cats will go through a one-month apprenticeship. The reason Ken and Richelle are doing this is so they can decide which, if any, will become permanent worker cats. (By the way, Jess became a worker cat. Congratulations Jess!) Also, they feel they need time to get to know the cats so they will be able to better match them to a forever family. It will still be possible to fill out an application to adopt an apprentice cat. It is just no longer going to be first-come-first-served. The best match will be chosen after the apprenticeship time is up.